Sprawling Halong City (also known as Bai Chay) is the bay’s main gateway, but its high-rises are a disappointing doorstep to this site. Most visitors opt for cruise tours that include sleeping on board within the bay, while a growing number are deciding to eschew the main bay completely, heading straight for Cat Ba Island from where trips to less-visited but equally alluring Lan Ha Bay are easily set up.

All visitors must purchase entry tickets for the national park (40,000d) and there are also separate admission tickets for attractions in the bay, such as caves and fishing villages (30,000d to 50,000d).

Halong Bay’s islands are peppered with caves, many now illuminated with technicolour lighting effects. Sadly, litter and trinket-touting vendors are also part of the experience.

Which of the caves you’ll visit depends on factors including the weather and the number of other boats in the vicinity.

Cat Ba Island is the most developed of Halong Bay’s islands with Cat Ba Town the launching pad for the gorgeous Lan Ha Bay region. Some Halong Bay cruise operators include Cat Ba and Lan Ha Bay on their itineraries.

Most cruises and day-tripper boats include at least a couple of caves, an island stop-off and a visit to one of Halong Bay’s floating villages. The villagers here farm fish, which are caught offshore and fattened up in netted enclosures.

The most popular way to experience Halong Bay’s karst scenery is on a cruise. Fortunately everyone, their grandmother and their friendly family dog wants to sell you a Halong Bay tour in Hanoi. Unfortunately, shoddy operators abound.

Every year we receive complaints from travellers about poor service, bad food and rats running around boats on ultra-budget cruises, and more expensive trips where itinerary expectations didn’t meet what was delivered.

Tours sold out of Hanoi start from a rock-bottom US$60 per person for a dodgy day trip, and can rise to around US$220 for two nights. For around US$110 to US$130, you should get a worthwhile overnight cruise. At the other end of the scale, cruising the karsts aboard a luxury Chinese-style junk is hard to beat. But be aware that paying top dollar doesn’t necessarily compute into heading away from the crowds.

Most cruise-tours include return transport from Hanoi, Halong Bay entrance fees, and meals. A decent overnight tour usually includes kayaking. Drinks and even water are extra, payable in cash only.

This is one destination where it definitely pays to do your homework beforehand. Here are some suggestions to help make Halong Bay memorable for the right, rather than wrong, reasons:

A kayak among the karsts is an option on most Halong Bay tours. Count on about an hour’s paddling, often including negotiating your way through karst grottoes and around lagoons, or to a floating village in the bay.

The most popular and best way to experience Halong Bay is staying overnight on a boat. Cat Ba Island has the best terra firma accommodation options, and there’s some accommodation on the surrounding islands. Otherwise Halong City is a cheap land option, if you don’t mind the grey cityscape of karaoke and casinos, or want budget stays.

Most people will eat onboard a cruise, at the varied restaurants or market stalls of Cat Ba Island, or opt for the cheap and adequate joints of Halong City.

Halong translates as ‘where the dragon descends into the sea’ and legend tells that this mystical seascape was created when a great mountain dragon charged towards the coast, its flailing tail gouging out valleys and crevasses. As the creature plunged into the sea, the area filled with water, leaving only the pinnacles visible. The geological explanation of karst erosion may be more prosaic, but doesn’t make this seascape any less poetic.

Flights to Halong Bay
Ready to make it happen? Search for the best deals on flights to Halong Bay now.
Getting There & Away
Most travellers elect to experience Halong Bay on a cruise-tour prearranged in Hanoi, which usually includes transfers to/from the bay.
It’s also possible to head to Halong City (Bai Chay) independently and book a boat trip at Tuan Chau Pier.
Alternatively, head directly to Cat Ba Island from Hanoi and arrange a boat trip from there to explore Lan Ha Bay.

This huge cave consists of three chambers reached via 90 steps. Inside, ceilings soar up to 25m high while some rather disco-festive lighting illuminates a wacky array of stalactites. Among the stalactites of the first hall, scores of gnomes appear to be holding a meeting. The cave derives its name from the role it played during the 13th-century battles with the Mongolians when locals stored wooden stakes, used to destroy invading ships, in the third chamber here. 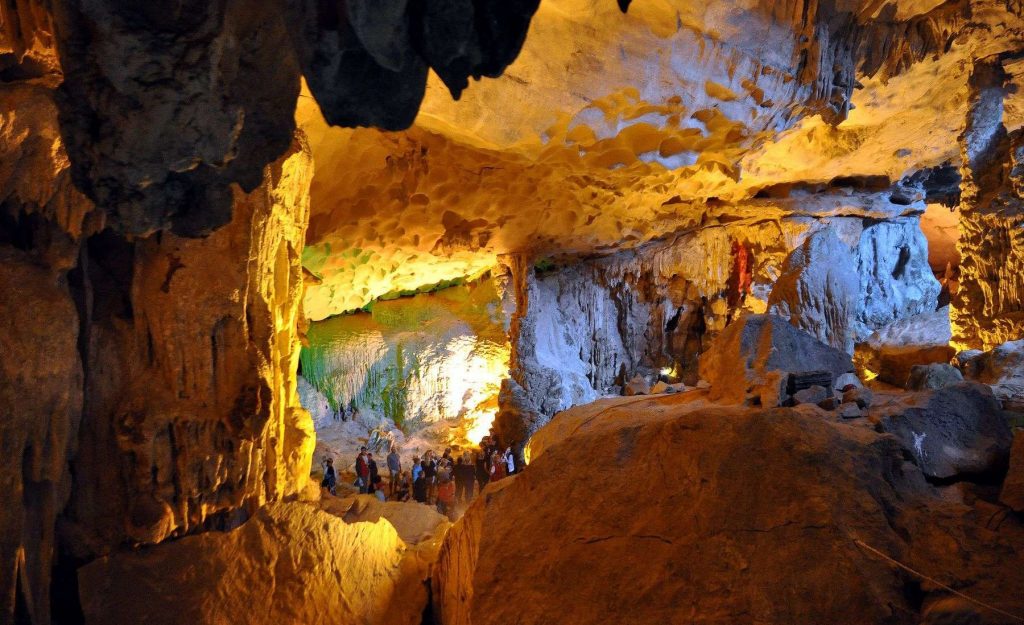 Hang Trong has wide-arched entrances on either side and a ceiling clustered with stalactites. It’s so named because when the wind blows through its stalactites, the effect resembles the sound of distant drumbeats.

The popular Hang Sung Sot has three vast chambers; in the second there’s a pink-lit rock phallus unsurprisingly regarded as a fertility symbol. Even less surprisingly, some guides refer to it as the ‘Cock Rock’.